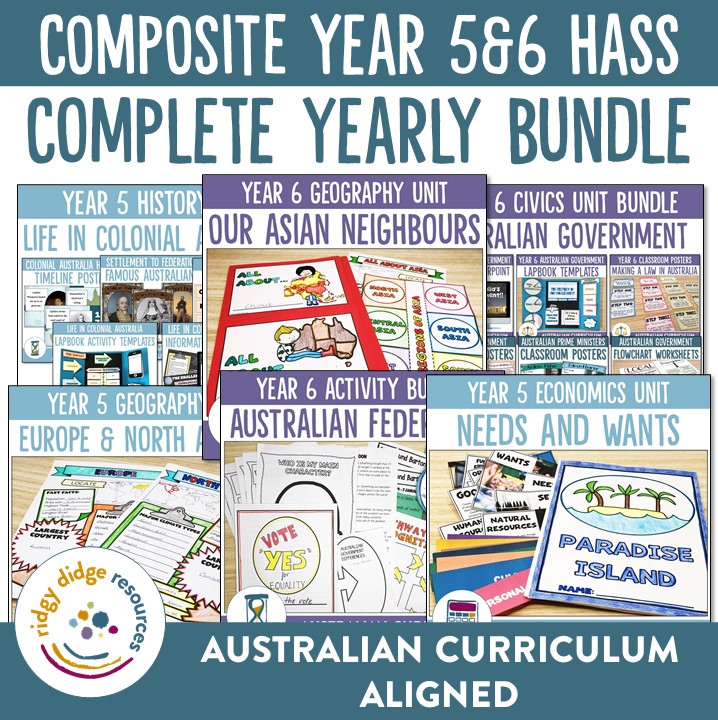 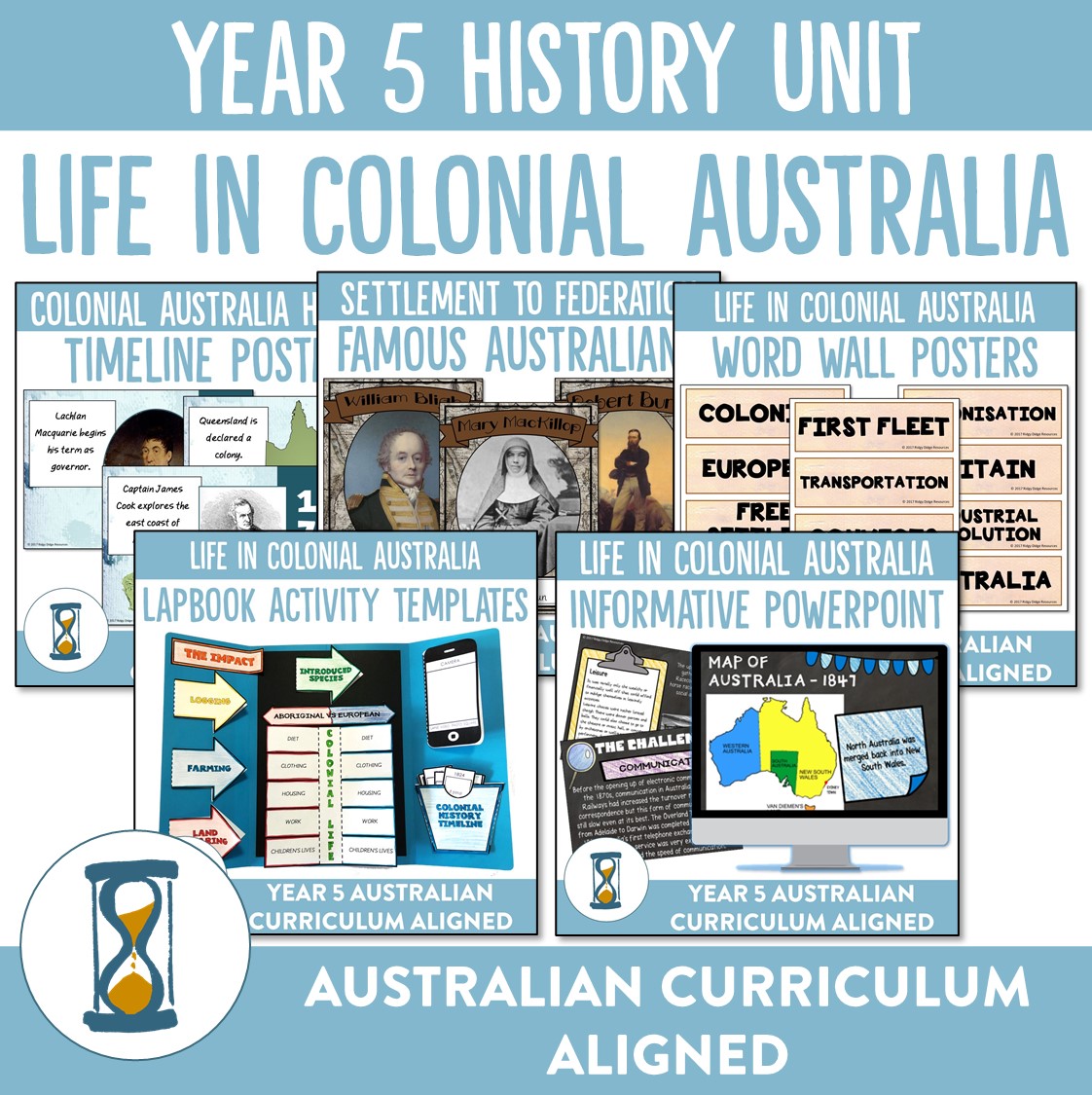 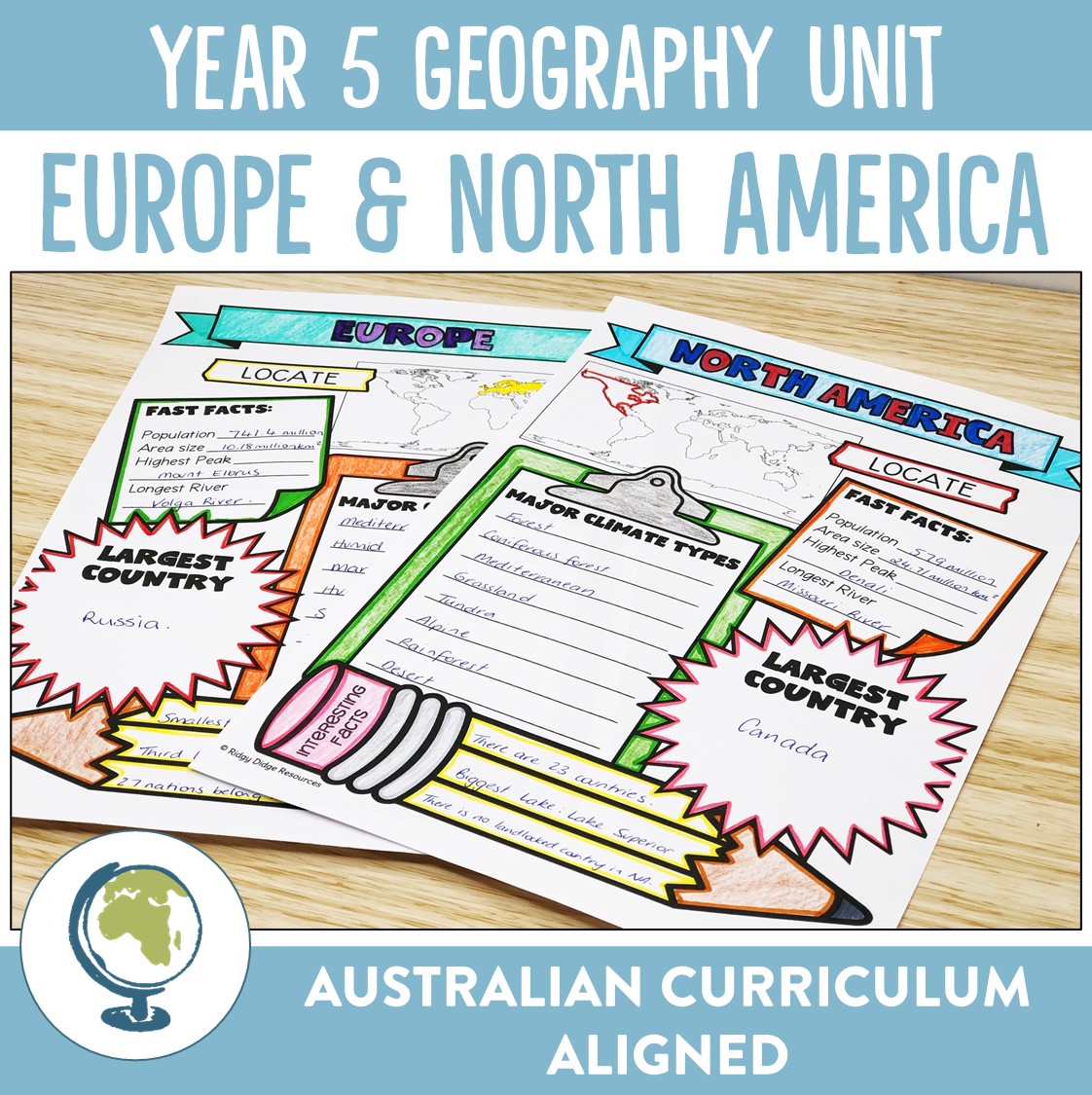 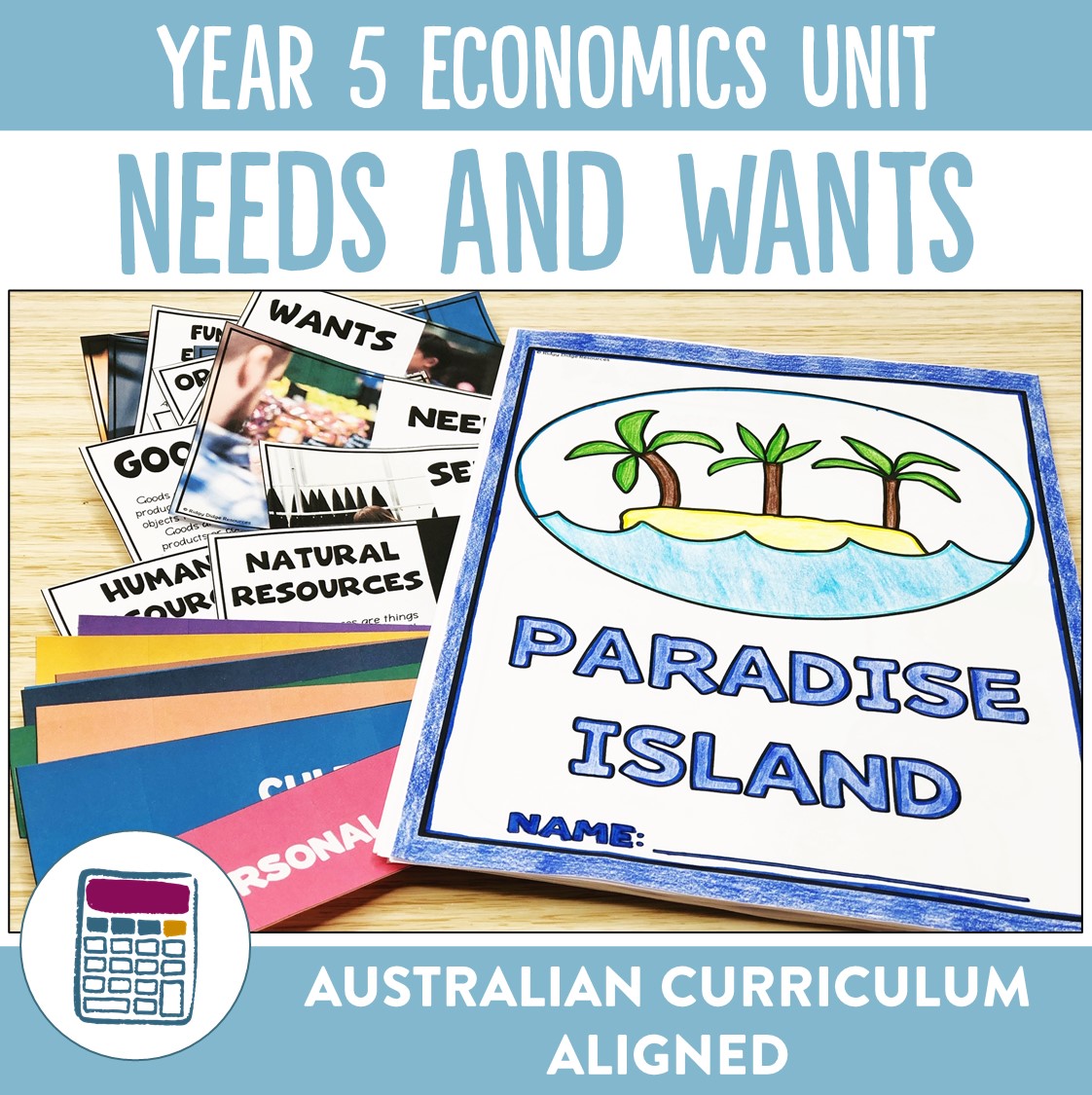 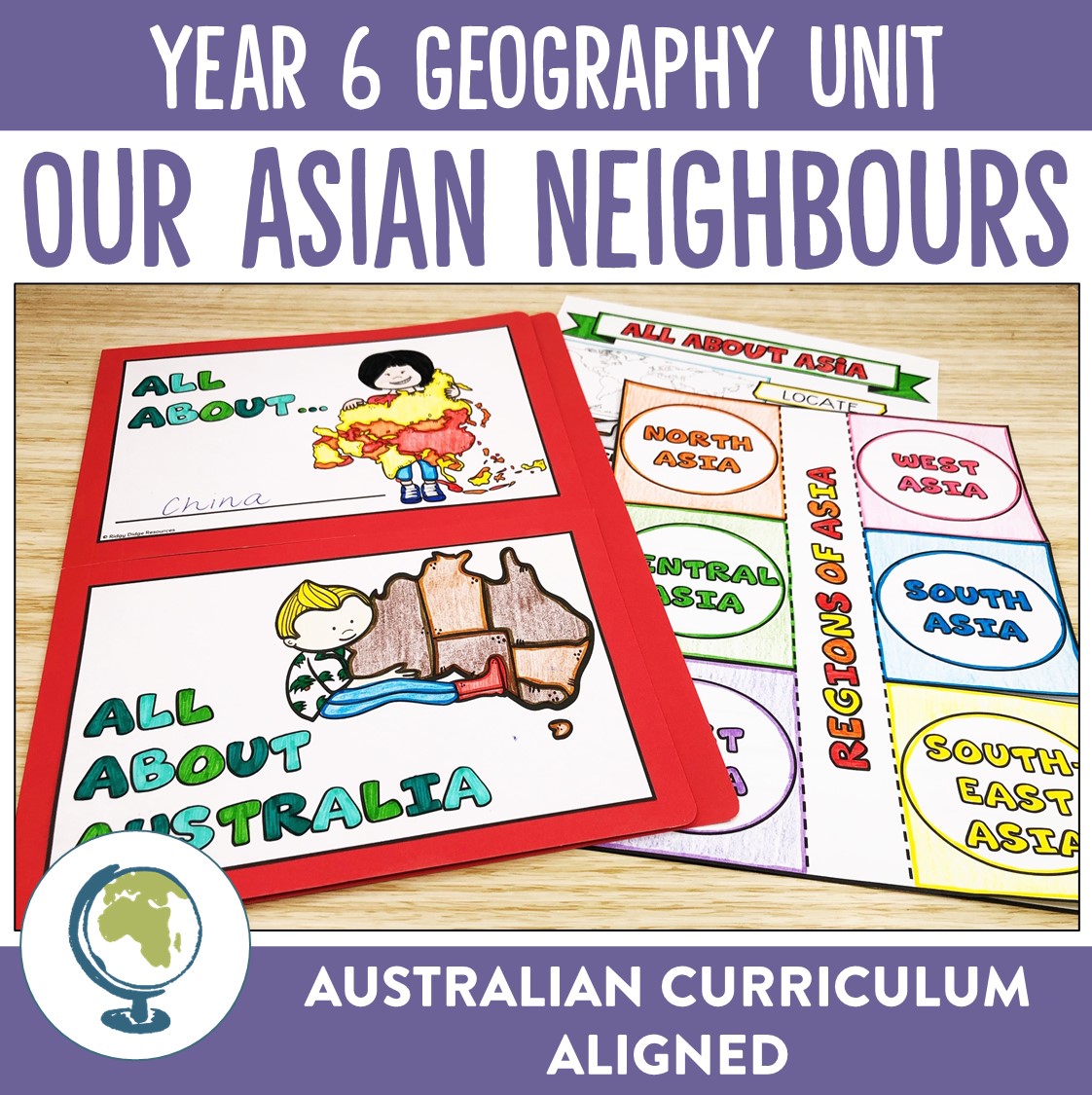 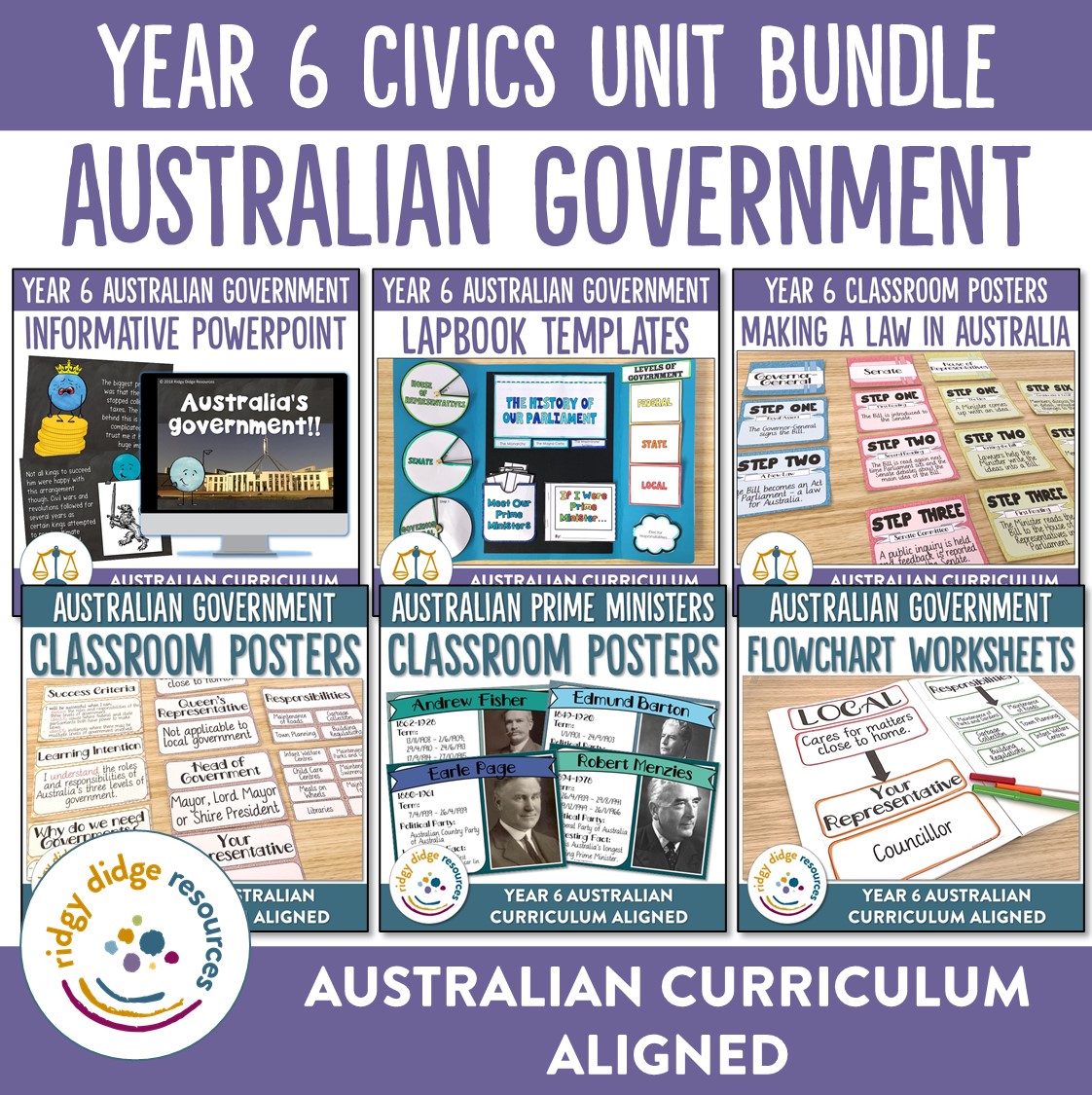 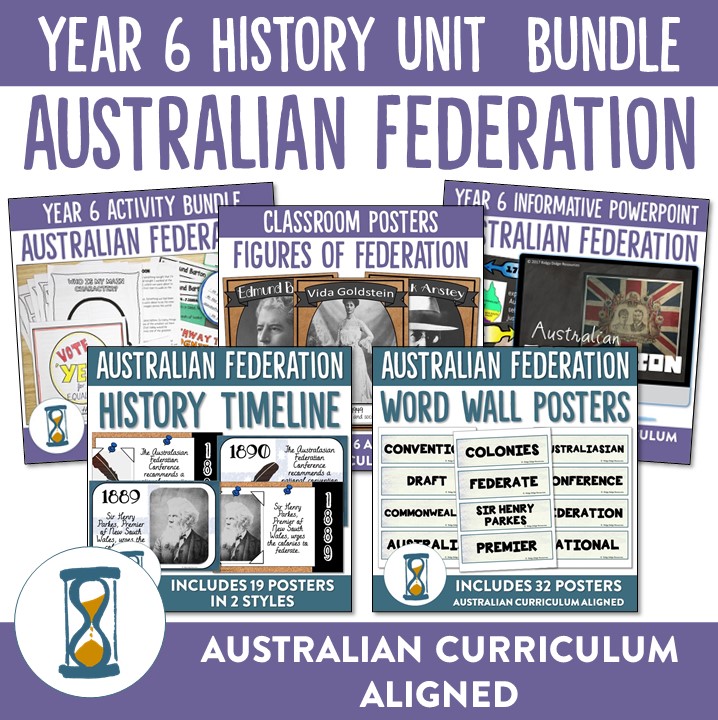 Ready to get yourself completely prepared for the year ahead? We have composite classrooms covered with the complete set of our ever popular HASS units. Fun for students, easy for you to implement and an irresistible way to help young minds explore a variety of topics aligning to the Year 5 and Year 6 Australian Hass Curriculum!
Want to get more bang for your buck? Become a member! Join now
Categories: Civics and Citizenship, Geography, HASS, History, Powerpoints, Year 5, Year 6 Tags: asia, Australian curriculum, colonial life, europe, Federation, geography, Government, needs and wants, north america

Ready to get yourself completely prepared for the year ahead? We have composite classrooms covered with the complete set of our ever popular HASS units. Fun for students, easy for you to implement and an irresistible way to help young minds explore a variety of topics aligning to the Year 5 and Year 6 Australian Hass Curriculum!
This bundle includes the following:
– Year 5 History Unit – Life in Colonial Australia
– Year 5 Economics and Business Unit – Needs and Wants
– Year 5 Geography unit – Europe and North America
– Year 6 Federation Unit
– Year 6 Australian Government Unit
– Year 6 Asian Neighbours Unit
– BONUS – Year 5 and 6 HASS Yearly Overview (so you can see at a glance our suggested timing in delivering each unit)
These activities, powerpoints and posters compliment all the following Australian Curriculum Year 5 HASS content descriptors:
History:
– Reasons (economic, political and social) for the establishment of British colonies in Australia after 1800 (ACHASSK106) – The nature of convict or colonial presence, including the factors that influenced patterns of development, aspects of the daily life of the inhabitants (including Aboriginal Peoples and Torres Strait Islander Peoples) and how the environment changed (ACHASSK107)}
Geography:
– The influence of people, including Aboriginal and Torres Strait Islander Peoples, on the environmental characteristics of Australian places (ACHASSK112)
– The influence of people on the environmental characteristics of places in Europe and North America and the location of their major countries in relation to Australia (ACHASSK111)
Economics and Business:
– The difference between needs and wants and why choices need to be made about how limited resources are used (ACHASSK119)
– Types of resources (natural, human, capital) and the ways societies use them to satisfy the needs and wants of present and future generations (ACHASSK120)
– Influences on consumer choices and methods that can be used to help make informed personal consumer and financial choices (ACHASSK121)
These activities, powerpoints and posters compliment all the following Australian Curriculum Year 6 HASS content descriptors:
History:
– Key figures, events and ideas that led to Australia’s Federation and Constitution(ACHASSK134)
Geography:
– The geographical diversity of the Asia region and the location of its major countries in relation to Australia (ACHASSK138)
– Australia’s connections with other countries and how these change people and places (ACHASSK141)
– Differences in the economic, demographic and social characteristics of countries across the world (ACHASSK139)
– The world’s cultural diversity, including that of its indigenous peoples (ACHASSK140)
Civics and Citizenship:
– The key institutions of Australia’s democratic system of government and how it is based on the Westminster system (ACHASSK143)
– The roles and responsibilities of Australia’s three levels of government (ACHASSK144)
– The responsibilities of electors and representatives in Australia’s democracy (ACHASSK145)
– Where ideas for new laws can come from and how they become law (ACHASSK146)
– The shared values of Australian citizenship and the formal rights and responsibilities of Australian citizens (ACHASSK147)
– The obligations citizens may consider they have beyond their own national borders as active and informed global citizens (ACHASSK148)
Topics covered in this bundle include:

Life in Colonial Australia
– Life in the Colonies, The Challenges, Reasons for establishing more colonies, Timeline of Colonial Events, Impact of European settlement, Significant People
Australia Federation
– The Key events that lead to Australia’s federation. – The individuals that contributed to Australia’s federation. – The influence the Westminster and US government system had on our Australian government system – The impact of federation of Aboriginal and Torres Strait Islanders – students will explore the issues surrounding citizenship rights and the pathway to reconciliation.
Australian Government
– The History of Democracy in Australia – the Monarchy, the Magna Carta, the Westminster System – Australia’s Three Levels of Government – What are they? Who governs? What are their roles and responsibilities? – Making a Law in Australia – follow the steps. – Meet Our Prime Ministers – If I Were Prime Minister – mini book – Elector Responsibilities thought bubble
Asian Neighbours
– Where is Asia? – Asian Regions – Characteristics of Asia – Countries of Asia – Asian Capital Cities – Longitude and Latitude
Europe and North America
– Continents of the World – Countries of Europe and North America – Climate Change
Needs and Wants
– Wants and Needs, Goods and Services, Resources: Natural, Human and Capital, Scarcity, Consumer Choices, Advertising Tips and Tricks
If you liked the look of this resource, you may also like these:
– Year 5/6 Australian Curriculum Yearly Health Bundle
– Riddle of the Week Posters

Please feel free to contact me with any questions.

Thank you so much,
Mel

There are no reviews yet.